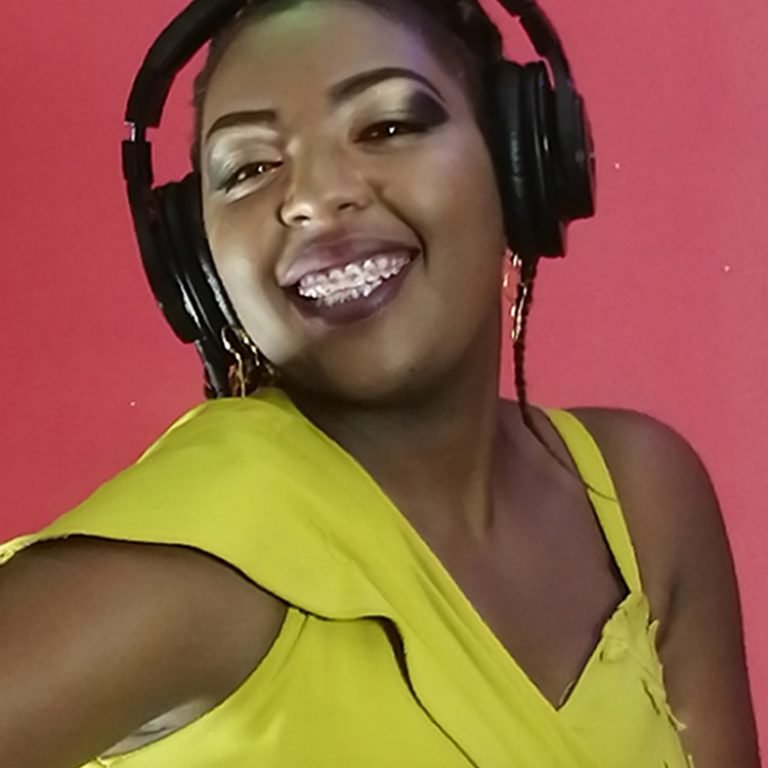 Based in Nairobi, Kenya, Marcy Kimanzi was a finalist in Hit Like A Girl X and was the first African to win an award in the contest. She has performed with Esther Wahome, a Kenyan gospel artist, Mufasa the Poet, the all-female percussion group Motra Music and the Great African Caravan, which features artists from different parts of the world. She currently teaches drums while working as a freelance drummer and percussionist.

Marcy is also the founder of AFEDAPE (African FEmale Drummers And PErcussionists) which is a community that seeks to inspire and empower African girls and women to step into situations that have traditionally been limited for women. 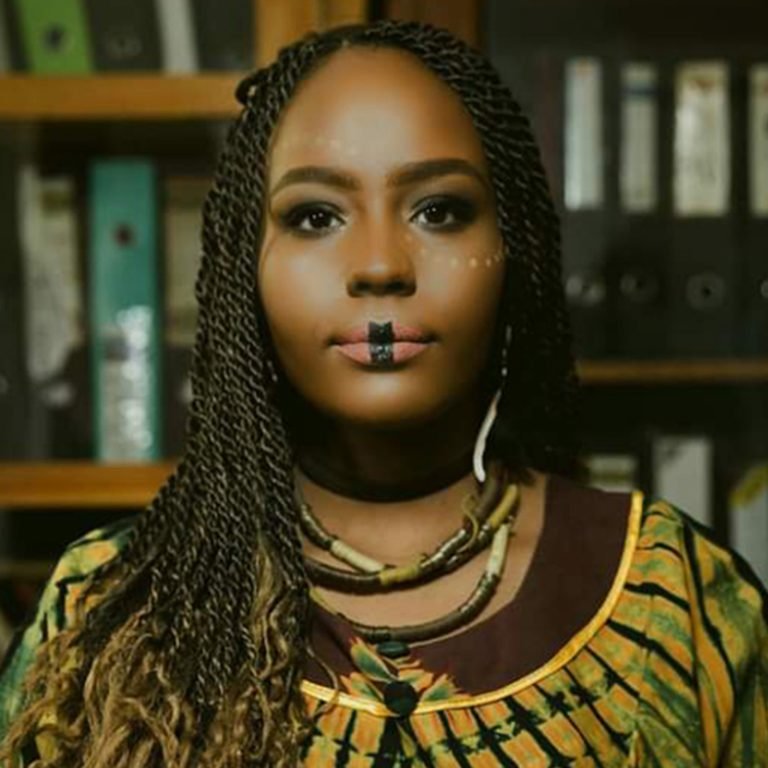 Salma Fadlalla Omar Mahmoud a is a percussionist, facilitator and educator from Sudan. She is currently studying music and live audio engineering. Salma co-founded Drum Circle Sudan with Ahmed Homaida to spread drumming culture. She and Ahmed are also working to create an educational video series about African instrument building (funded by Music in Africa Foundation and due out later this year). 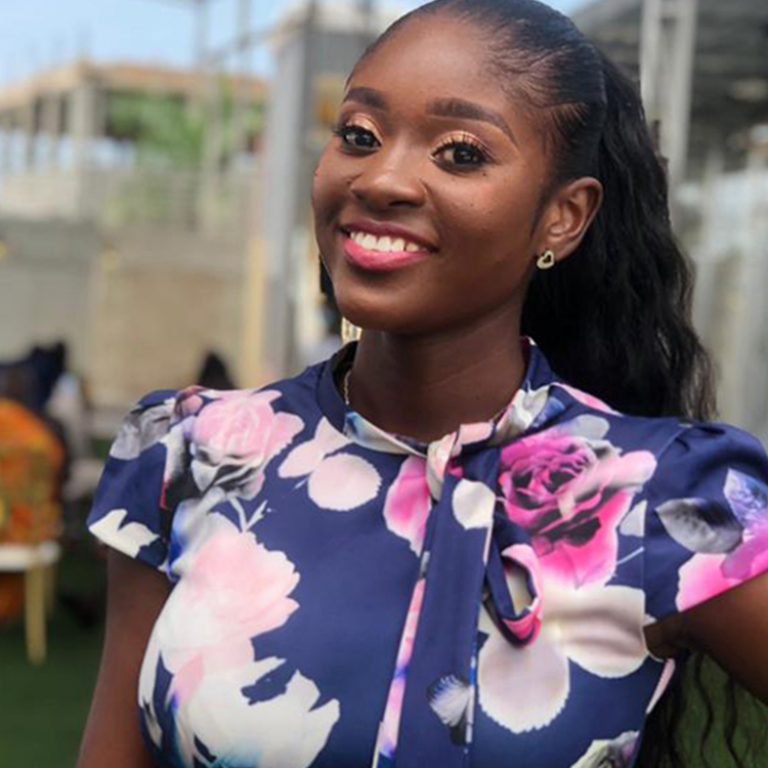 Priscilla Amgee is a drummer and business tycoon from Ghana. 🇬🇭She is very passionate about music and plays the drums and keyboards. Businesswise, she is a marketer and sells cars. 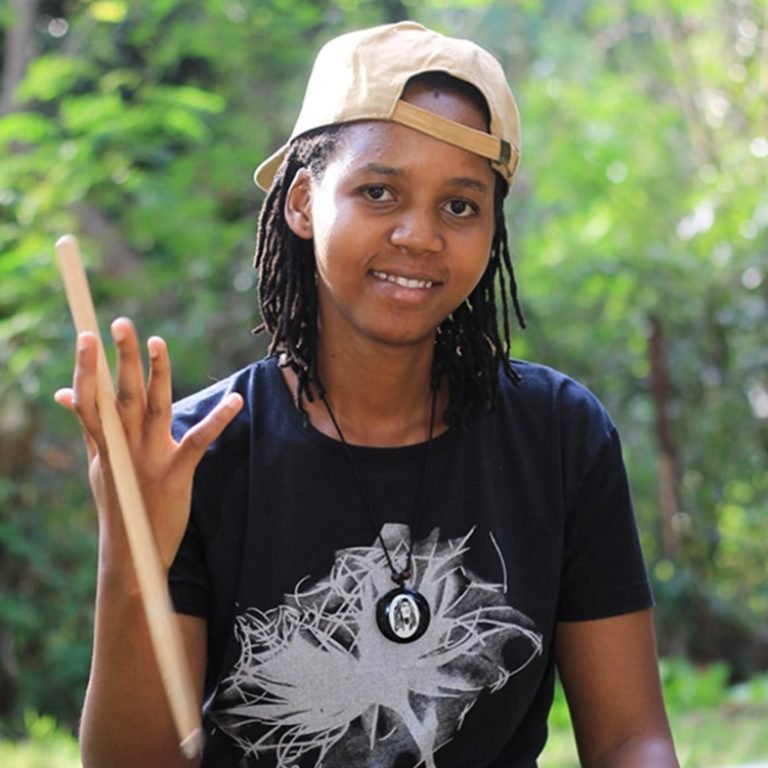 Originally from Uganda but currently mobilizing in Tanzania, Miriam Namuyodi is a drummer and music educator who specializes in teaching and playing Rhythm, Body Percussion and Drums.

Miriam started her drumming journey in church but currently plays many different genres in many musical settings, including performances with Catherine Kusasira (Uganda), Damien Soul (Tanzania) and Alifchief (Brunei) as well as bands such as Black and White, Pearl, Fusion Five, Femme Spirit and Vibrants.

Since graduating at the top of her class in both Land Management and Music, Miriam has participated in a variety of international symposiums and festivals in Africa and around the world. 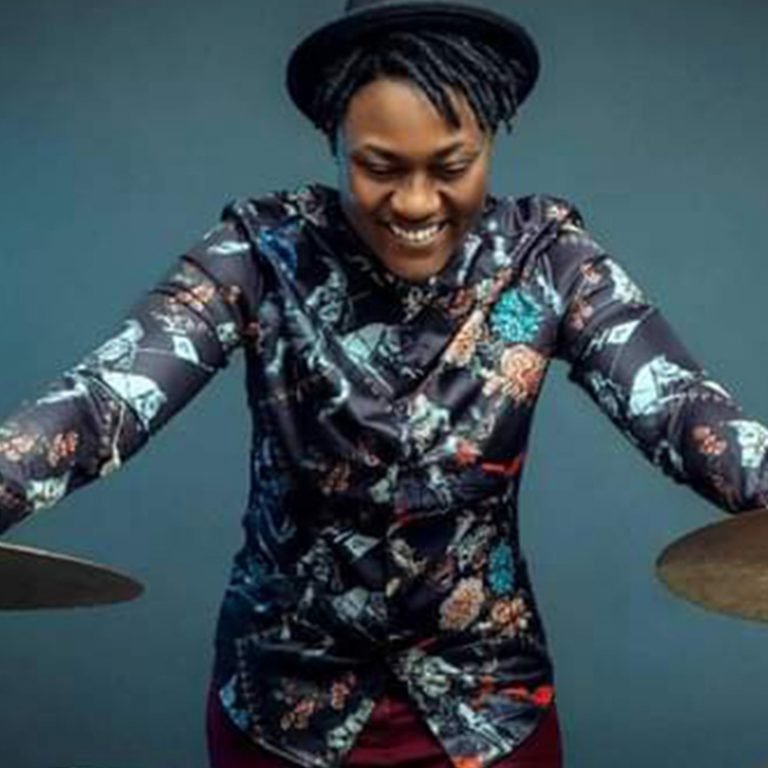 Lyle, whose full African name is Liliane Nakobo, is a young woman from the Ivory Coast. Passionate about music, she’s a drummer, sound designer, beatmaker and voice acting coach. Lyle says that it is through rhythms and sounds, encounters and sharing, that she strives to keep the tempo of her daily life. 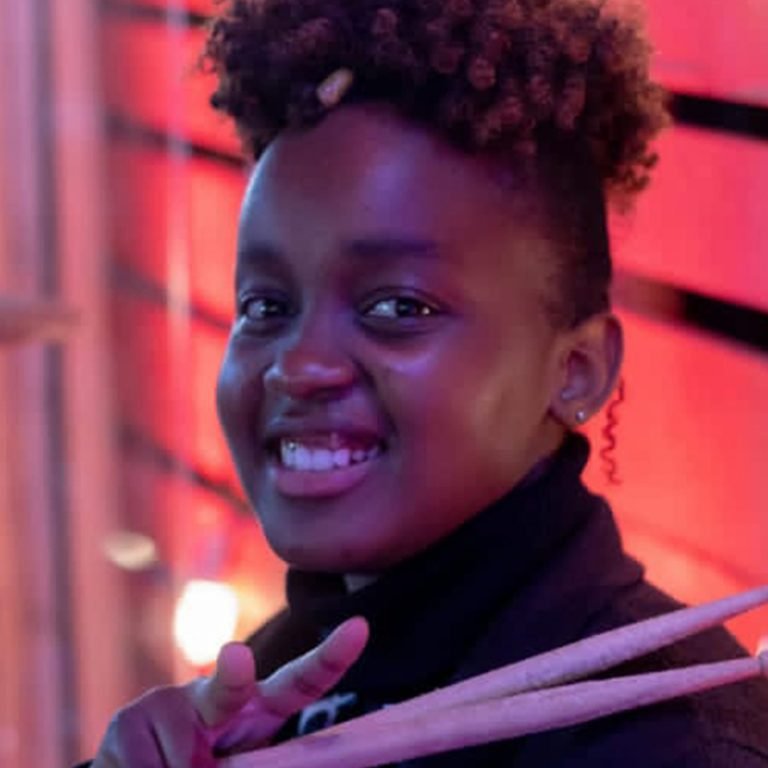 21-year old Beth Nzakwa Musyim lives in Nairobi, Kenya. Currently an International Relations student at Daystar University, Beth started playing drums in high school. As her passion, knowledge and drumming skills grew she was asked to play for the Mamlaka Hill Chapels in Nairobi and Ruaka. Through her drumming, Beth hopes to encourage young musicians to be bold and work hard. 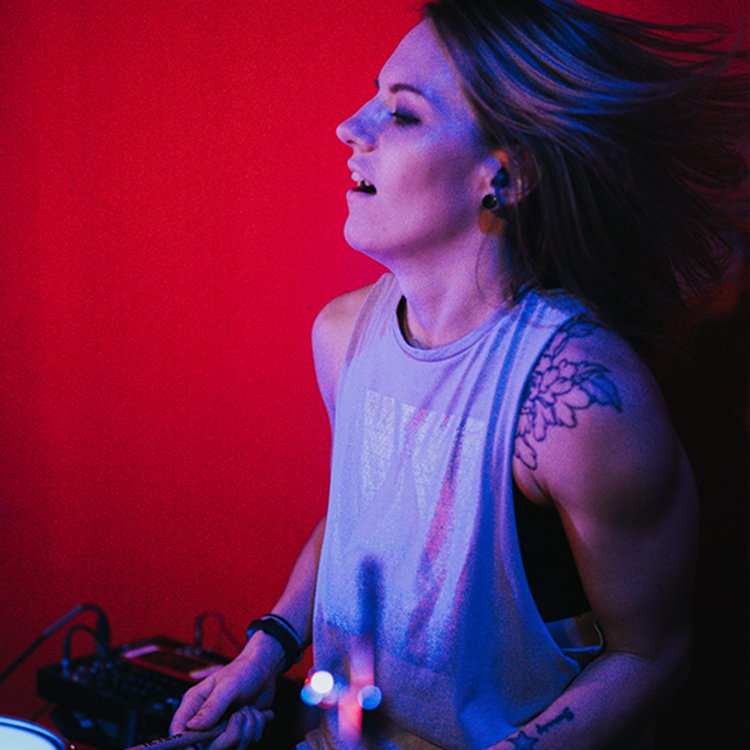 I was born in a small city in central Russia. Although there were no musicians in my family, I was always interested in music, art and dance. However, it wasn’t until I was working on my Civil Engineering degree at university that I felt the calling to be a drummer.

I began studying with the great Russian drum teacher Alexander Nikitin, started to play with bands in my hometown and participated in more than a dozen different contests in Russia and nearby countries— taking first place at Drummers United 2019 in Moscow.

Looking for a change and new challenges, I moved to Dubai at the age of 25. Being in Dubai gave me the opportunity to play with many different musicians from many different countries. I had amazing experiences like playing in the opera, playing with an all-female symphonic orchestra, playing for fashion shows and many more.

I can tell you that I was the only female drummer in Dubai when I arrived. But I was able to start my own drum school once I got here and many of my students are now girls. As the Hit Like A Girl Ambassador to the Middle East, my goal is to empower more girls and women to play drums and increase our number throughout this historic region. 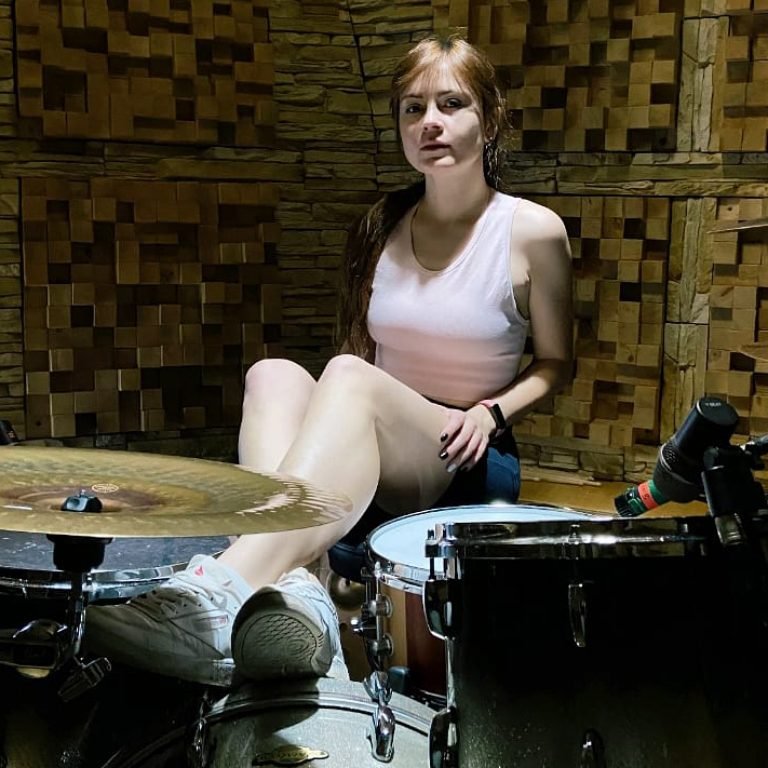 Up-and-coming Russian drummer Liz Yurina didn’t start drumming until her late teens, which is a bit later than most players. However, the now 20-something has certainly made up for lost time. With the combination of her natural musical and physical talents, her intelligence and perseverance plus her incredibly adventurous spirit, Liz is not only a key member of the emerging community of female drummers in Russia— she may one day become a role model for young girls around the world.

Liz admits to liking a wide range of music. More precisely, she likes the challenge of learning a wide range of musical styles, including Metal, Latin, Pop, Rock and R&B. Despite any lack of experience, in her live and recorded performances, Liz applies her smooth, well-developed hand and foot technique to these genres with the intensity, musicality and flair of a seasoned pro.

Liz is an instructor at Drumstarz, one of the largest and most famous drum schools in Russia, where she teaches boys as well as a growing number of girls and women. She was also recently named as the Russian Ambassador for the Hit Like A Girl organization.

“My goal as Ambassador is to support Hit Like A Girl’s mission to advocate for the female drumming community and also to expose the talent of Russian women to the rest of the world,” Liz says. 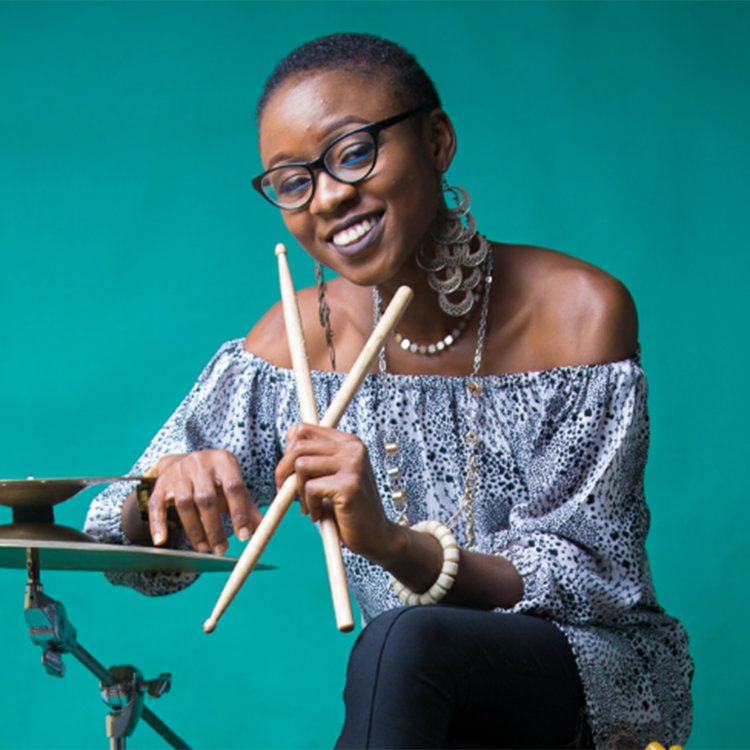 TopSticks (Temitope Odebiyi) is an award-winning drummer from Nigeria and the Hit Like A Girl Ambassador for Africa. She cites Sheila E, Steve Smith, Dave Weckl, Chester Thompson, Calvin Rodgers, K Sticks among her influences.

As a drummer, percussionist, life coach and Inspirational speaker, she has received multiple college degrees and numerous local and international awards. In addition, Topsticks has facilitated many leadership programs in Nigeria and throughout Africa. She is currently the official drummer and band director at the Breath of Life ministry where she also trains drummers online and in real life.

Pauline Roberts is a 22 year old percussionist, singer, composer and educator from Buenos Aires, Argentina. She won a grant from the National Arts Foundation commissioning new compositions for vibraphone and electronics, traveled twice as a scholar in Malletlab’s course in Florida, performed as the youngest in the Ciclo de Música Contemporánea and was a finalist for “Hit Like a Girl”— an organization that she now represents as a Latin American ambassador.

Pauline has recorded many albums as a side-woman, with CinemaDuo, and is currently recording her first solo album. She endorses BlueHaus mallets and TRX cymbals.