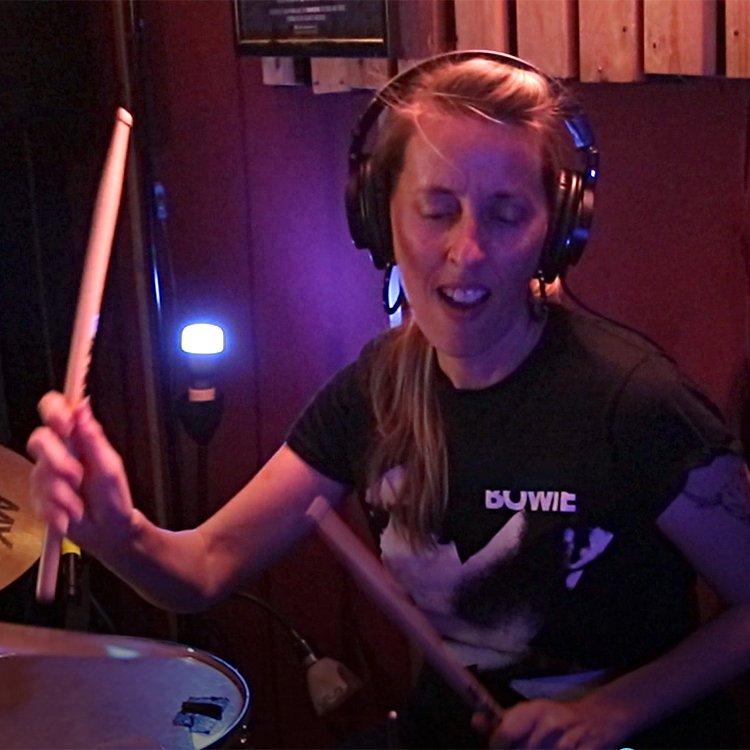 A drummer and a dreamer, Niri believes that life is what you make it, and you better make it fun.

She plays guitar, sings, and together with the music in her life, she is also a content manager and writer, a lecturer and a travel blogger.

Drumming has completely changed her life, and from the first second on the drum set, it felt very natural to her, like it was just waiting to come out. She says it’s one of the things that fills her with great happiness, that sometimes cannot be explained in words.

For the past few years, she’s been playing in a band, and all the time continues to learn, improve, and develop her creativity in drumming.

After the experience of participating in the HLAG contest she began to research the female drumming scene in Israel, which is relatively small but super cool, and not appreciated enough, and her goal is to encourage more and more female drummers and young girls from Israel to participate in the contest, and be aware of the movement, so that eventually there will be more and more women playing in major concerts with known artists and in TV shows regularly. 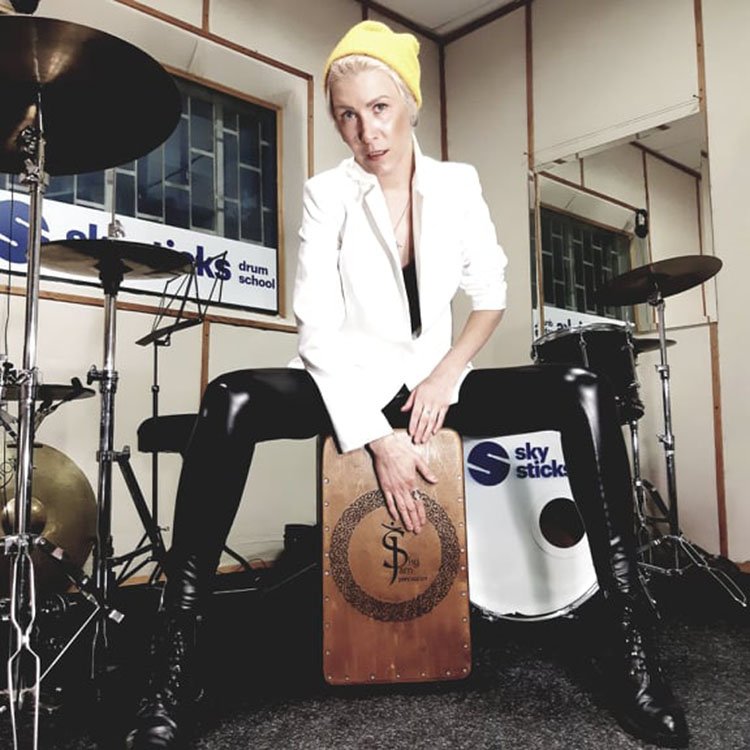 Producer. Singer. Drummer. It’s Never Too Late to Be a Rock Star Ideologist.

Passionate about people, heart-to-heart communication and management, for the last 20 years Iryna Butko has been dedicated to Marketing, PR and Production. However, despite the business life-style, music has always been the most important part of her world.

As a vocalist and co-founder of the BeTwins band, Iryna and her twin-sister Toma recorded and released their first album in 2014. In 2016 they became Yamaha E-Band Competition Winners in the Best Vocals category. Finally, in 2017 the girls tried their forces in the Hit Like A Girl Contest in the World Percussion category. This was the first time Iryna met a djembe.

Driven by the inner fire, desired to express her passion to life, she began playing drums only 3.5 years ago. And in 2019 she joined HLAG Contest as a drum-set player. Many days, hours and happy minutes spent in the SkySticks Drum School in Kiev to work learn the best playing technique and sound.

“I strongly believe, that we all have an immense potential to be happy, to feel alive and to groove our personal world in the synergy with the Universe. Drumming gives us power and freedom, lightning our inner fire to become stronger and to make this world brighter,” she says.

Iryna credits Hit Like a Girl Contest with totally changing her life. This event helped put her on the wide and opened road to discovering herself. Drumming is the part of mystic soul therapy and mental care. It can guide ladies all over the world to their “Shine on You Crazy Diamond” power and beauty.

Nowadays Iryna is a member of Be Together Drum Circle. She continues to be a SkySticks Drum School student, as well. 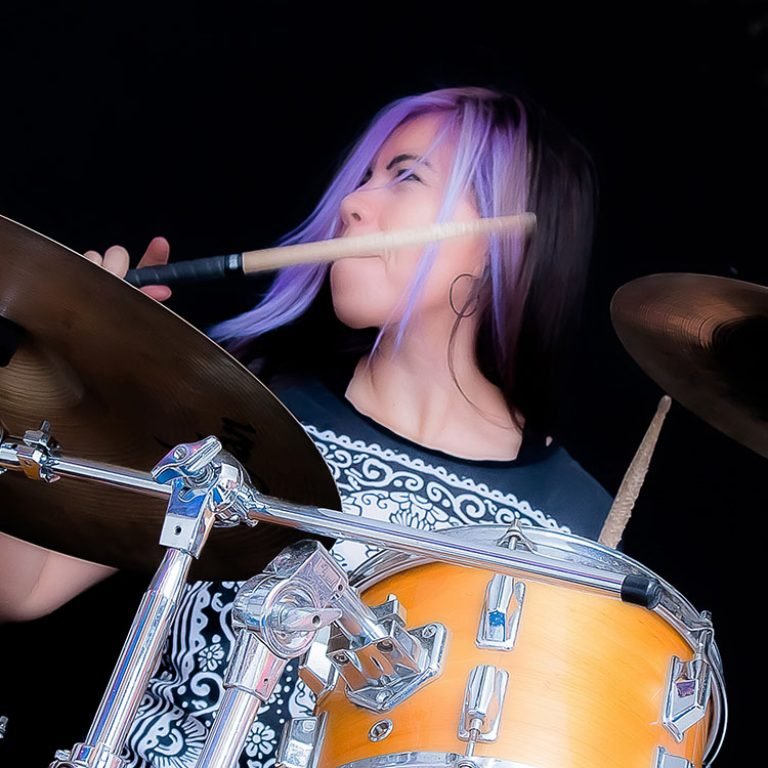 She was a finalist and representative of Bolivia in the first version of the Hit Like a Girl 2012 contest in 2012 and she was invited to participate the Aruba Musicians Convention and the Andes Percussion Festival. She has played in many independent bands as well as projects with world-renowned musicians and organizations. Her Progressive Metal project, “Catharma,” recorded an album called “Catharsys” and participated in festivals throughout South America.

Gata is currently the drummer of “Corporal Jigsore” with whom she has toured Europe and South America and, since 2017, she has been the percussionist for the jazz project “Ptrodixie.” In addition, she is the director of the “Campamento Gata Pinaya” Music Academy in La Paz— combining nearly 20 years of musical experience with 10 years of Holistic teaching in order to provide advanced musical training for new generations.

These days, Gata is in the studio working on her solo project, which will be released in 2022. 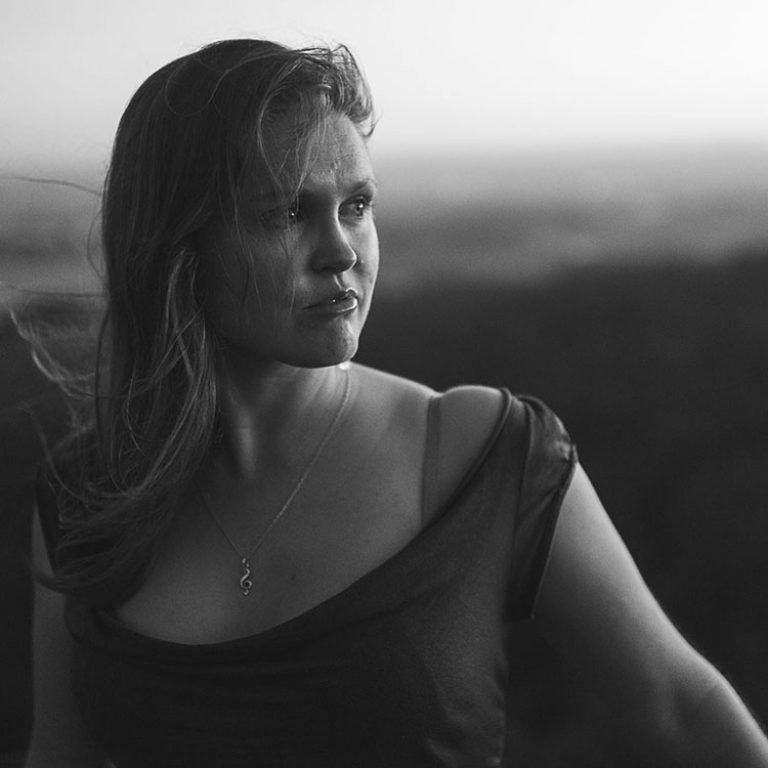 Cassandra Key is a drummer, drum tutor and also a founding member of the Sydney, Australia prog/post metal band Stare At The Clouds. She began playing drums at the age of 10 and has been fortunate to enjoy a wide range of playing experiences from concert bands, marching bands, orchestras, stage bands, rock bands and musicals. Cass has also been involved with private instruction and ensemble education in her home town of Orange in the NSW region. 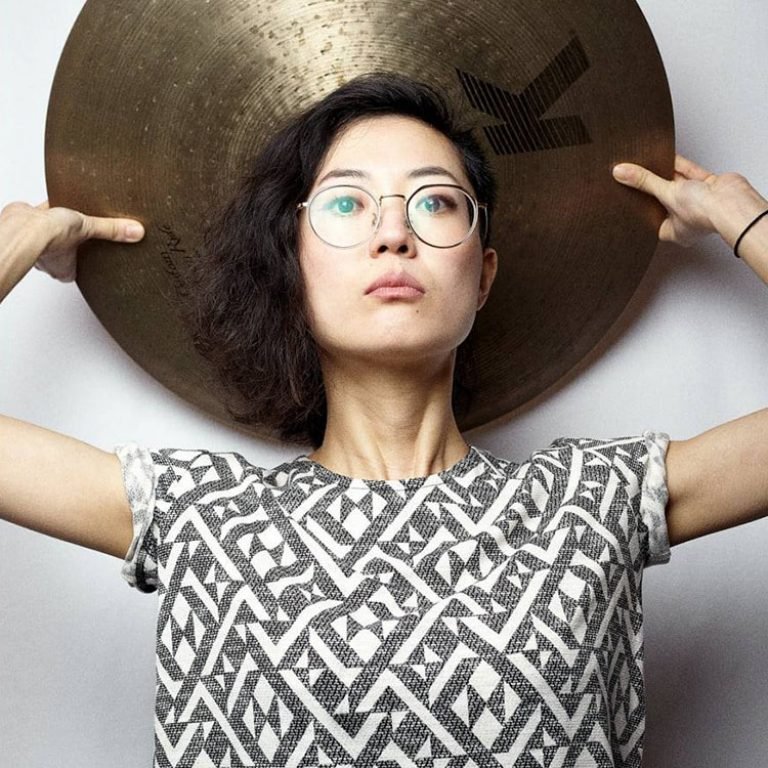 Born in Hiroshima, Japan, Aine Fujioka moved to the United States at the age of nineteen to study drums and jazz composition at the renowned Berklee College of Music in Boston. Since her graduation, she has been actively playing worldwide.

With her well-known steady and deep groove, Aine goes across different genres and continents.

She is one of the very few Japanese or female drummers who played regularly on the legendary Boston music scene. As a long-time member of the Boston-based indie rock band The Grownup Noise, she went on US tours and performed at the South by Southwest (SXSW) festival in Austin, Texas. She has played with soul vocalist Iyeoka whom she now tours with worldwide since 2008 until before the corona pandemic.

After moving to New York in 2011, Aine quickly became one of the most popular drummers on the city’s Blues scene. There she has played with Grammy Winners and nominees such as Bill Sims Jr. and Vasti Jackson.

Since 2015, her music career continues in Berlin, where she re-gains and re-assures her passion and love for music. Her current projects include Tellavision, Carlos Dalelane Band, and Ben Barritt, among other singer-songwriters.

Aine is also actively engaging in developing workshops `Beats de Roots´ for artists to develop physical and mental strength, and American NPO Women in Music Japan to support women in the music industry as a communication committee chair. 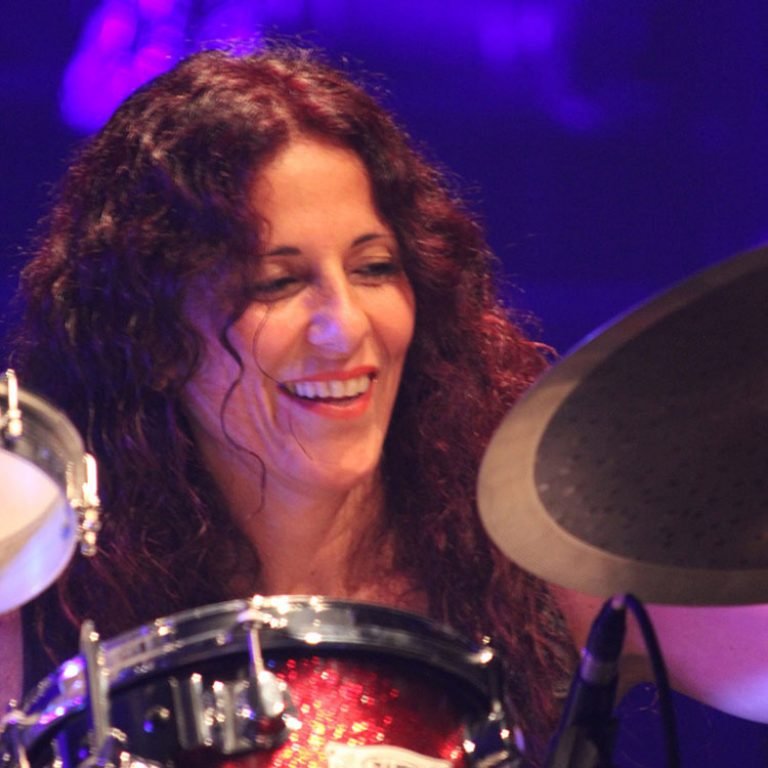 “From behind the drum set, Vera Figueiredo takes her audience from the Brazilian rainforest into the clubs and concert halls of the world. Jaws dropped at her unique presence, approach, and distinctive licks.” (T. Bruce Wittet, Modern Drummer Magazine).

In 1990, Vera founded the IBVF – Instituto de Bateria Vera Figueiredo, which became one of the most important drum and percussion schools in Brazil. A couple of years later, Vera and IBVF created one of the world’s most remarkable drum and percussion festivals: Batuka! Brasil. Held in São Paulo city since 1996, Batuka! Brasil brings together the top drummers on the planet and has had fifteen festivals and two album releases. Vera’s popular play-along book Vera Cruz Island – Brazilian Rhythms for Drumset was released by Hudson Music. 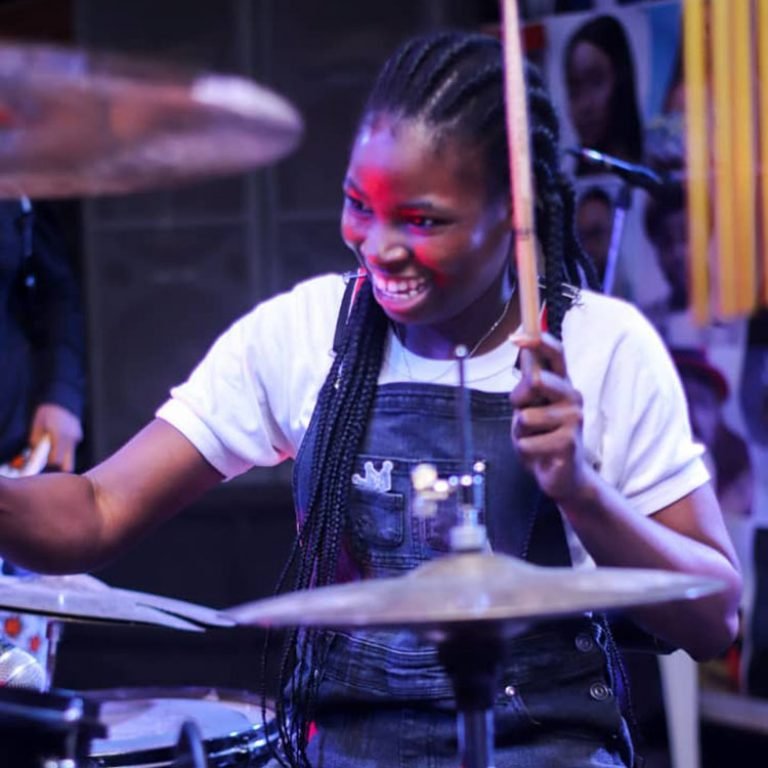 Oladipupo “Debby” Deborah is the Hit Like A Girl Diplomat for Nigeria. “Deekit”, as she is fondly called, is a drummer who is known for her strength and smile behind the drums. A graduate of the polytechnic Ibadan Ibadan, she never relents in the pursuit of knowledge and skill with respect to the music profession and life general.

Debby has played alongside different musicians in Nigeria and shared stages with great artists. She is currently working to establish drum therapy as a renowned and standard practice in Nigeria. 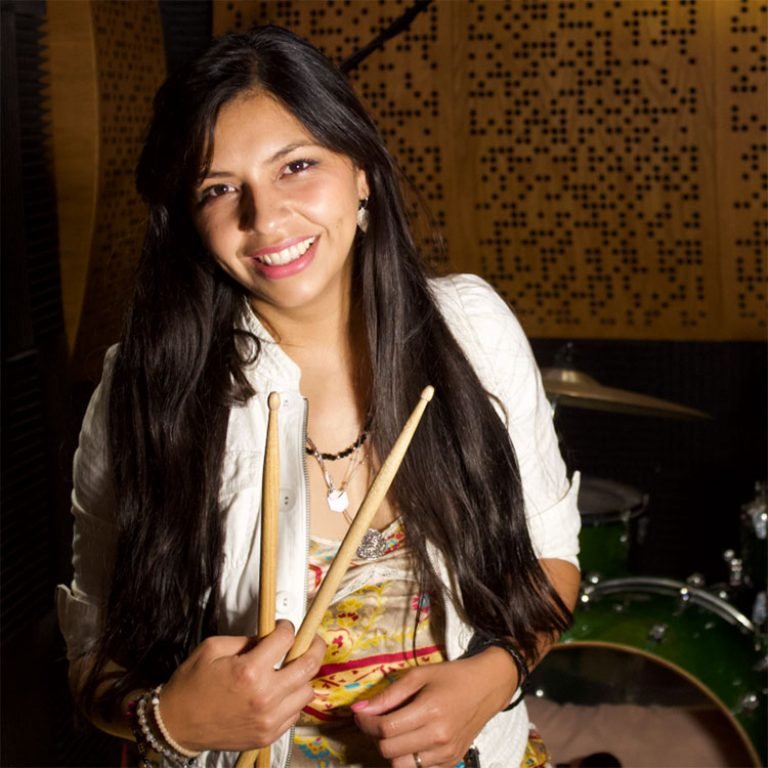 Cintia Concia is a songwriter, activist, and drummer of the independent band “Rockwell Road”. Born in Rosario, Santa Fe, Argentina but now living in Mexico, she has visited more than 1000 schools in Latin America with her NGO “Volver a Soñar” using music to help girls and boys in vulnerable situations.

In 2019, Cintia founded the “Ella Suena” (“She Dreams”) movement to peacefully promote gender equality and the empowerment of women. More than 200 female musicians from all over the world have been able to participate in this program.

She is currently developing the program “Creating Roads” to give musical education to low-income people using household utensils to initiate them into percussion. 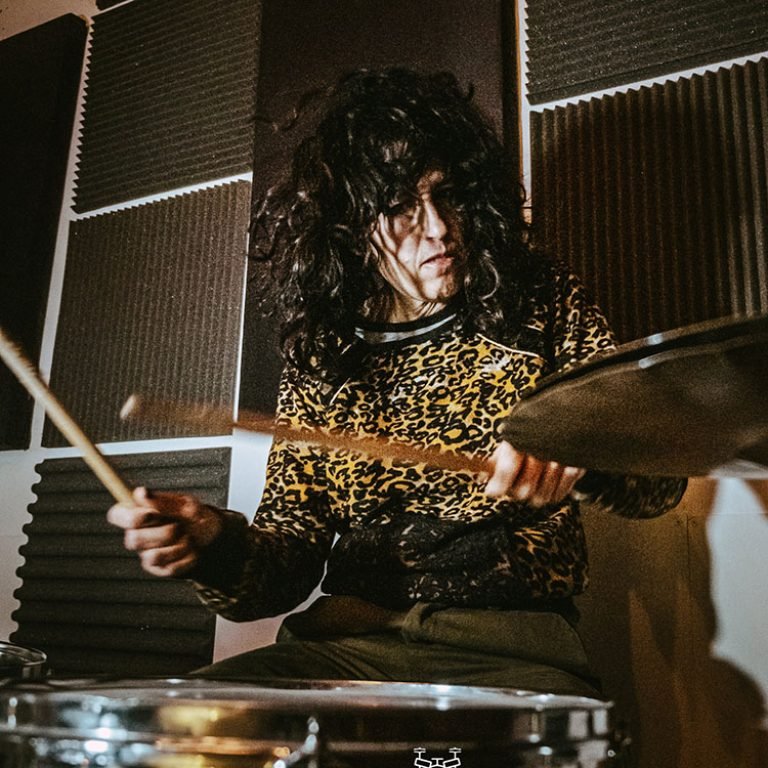 Paula Perrella is an Argentinian drummer, percussionist, composer and teacher. Her dance groove, versatility and minimalist set-up have become her trademark and opened doors for her as a session drummer with bands and musicians of many styles.

Paula studied with top Argentinian drummer Andrea Álvarez among others. She has played in Mexico and throughout Central and South America and is currently recording her first solo album. She teaches many women around the world both online and in person.