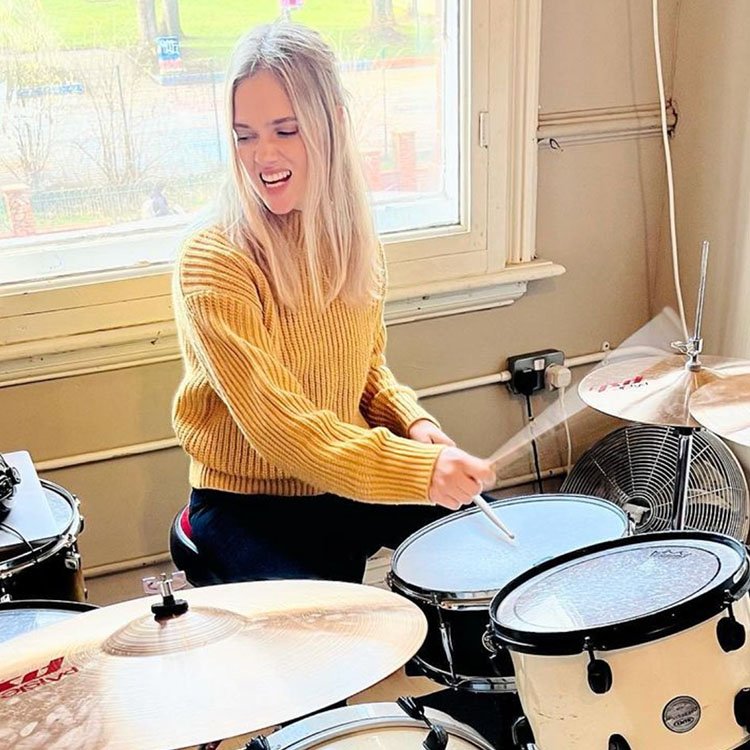 Florrie is an English drummer, pop singer-songwriter and model who became interested in playing the drums when she was on a family holiday in Greece at age six. She moved to London when she was 17 and gigged with several bands while working as a nanny during the day.

Since 2008 she has been the in-house drummer for the Xenomania production house— playing live and on record for top international artists such as Kylie Minogue, Girls Aloud and the Pet Shop Boys and regularly recording and releasing her own music, as well.

In 2014 Time magazine wrote that “Her brand of pop music is playful, propulsive, and built around rhythm, bearing the influence of her work as a session drummer.” 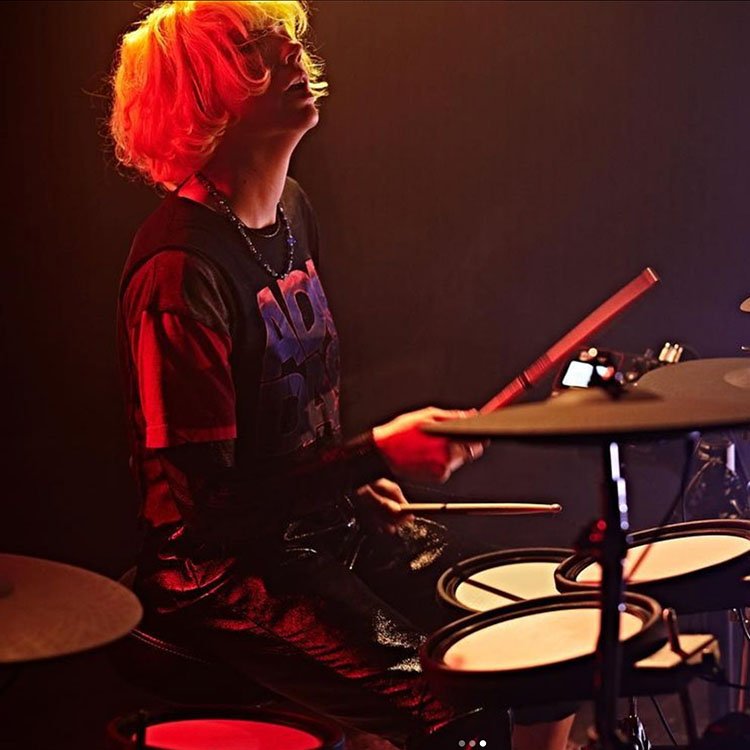 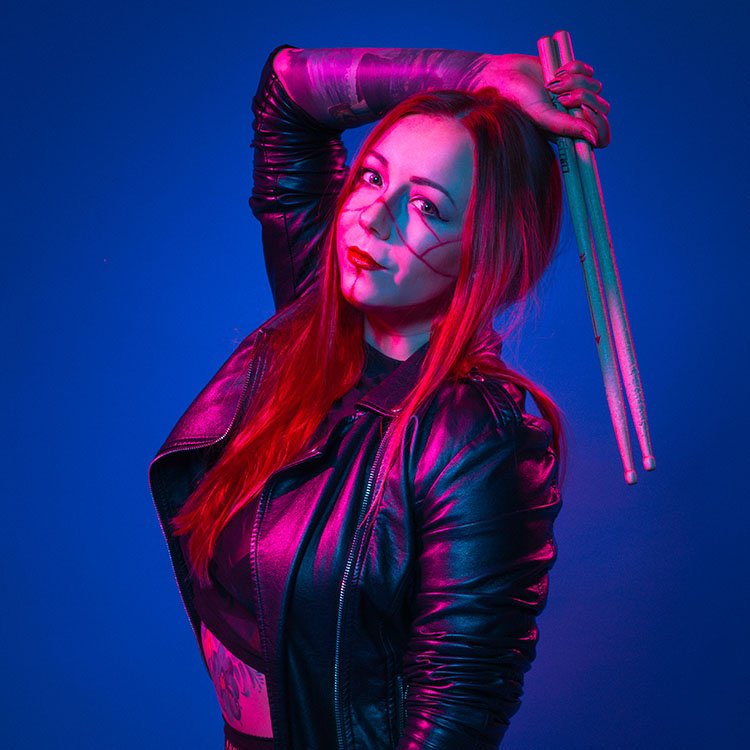 Veve Wolf (aka Veronika Svecova) has been drumming for thirteen years— quickly developing a solid, energetic modern style that incorporates an abundance of groove, creativity, energy and power. With a particular lean towards contemporary elements ranging from Metalcore, Heavy Rock/Metal and also Funk, Classic Rock and electronic, Veve’s drumming displays consistent growth with a technical powerhouse approach that is loaded with passion and innovation.

Original from from Slovakia, Veve moved to Dublin, Ireland in 2018 where she quickly established herself in the country’s flourishing metal scene, as the drummer for Neon Empire. The group fleshed out a unique, individual sound by experimenting with the established Metalcore formula and adding elements of electronica, dance and even prog rock to their palette.

In 2021 Veve was selected as a winner of the Hit Like A Girl contest for the UK region. 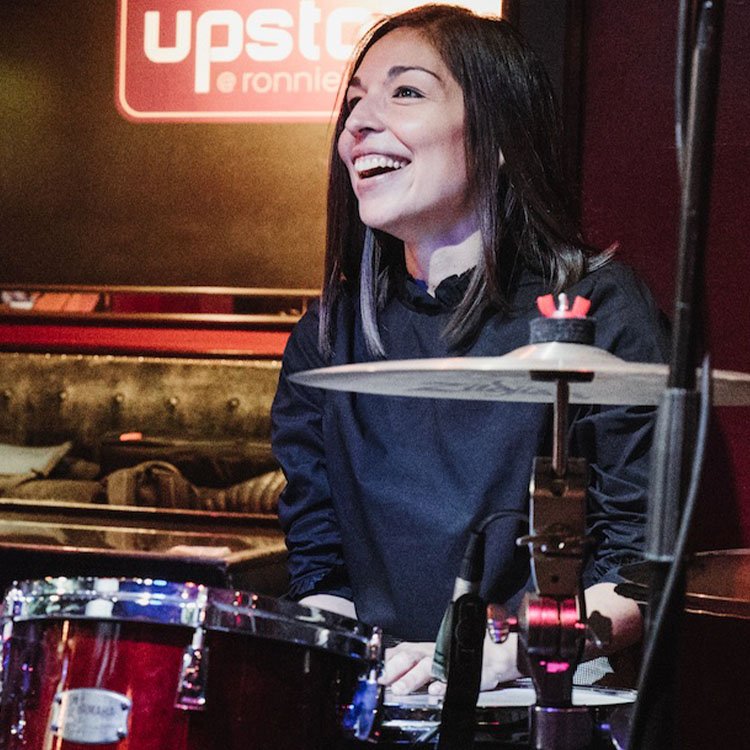 Migdalia van der Hoven is an international award winning drummer and RTOM Corporation/Bosphorus Cymbals artist from the UK. She is a Berklee College of Music graduate (where she studied and performed with Jackie Santos, Terri Lynn Carrington, Victor Mendoza and Mark Walker).

Migdalia is known for her groove, sensitivity and versatility across multiple genres such as funk, jazz, latin, pop and Christian music. Along with her latest project “The Migdalia van der Hoven Quartet”, she launched her new EP “Girl Facing South” with a series of dates in and around London (Ronnie Scott’s Jazz Club, Piano Smithfield, Toulouse Lautrec Jazz Club), including the EFG London Jazz Festival 2021. The EP comprises a mix of original and West Coast fusion tracks and has already received a number of very positive reviews from Grammy Award winning artists.

Migdalia has performed in the UK with Scott Stroman, Adam Glasser, Grifter Kid and The Midnight Raiders, Russell Brand and The All Souls Orchestra and as part of the Beantown Jazz Festival and on the BBC.

Her EP launch took place at Ronnie Scott’s world-famous jazz club in London and is available on all digital platforms. 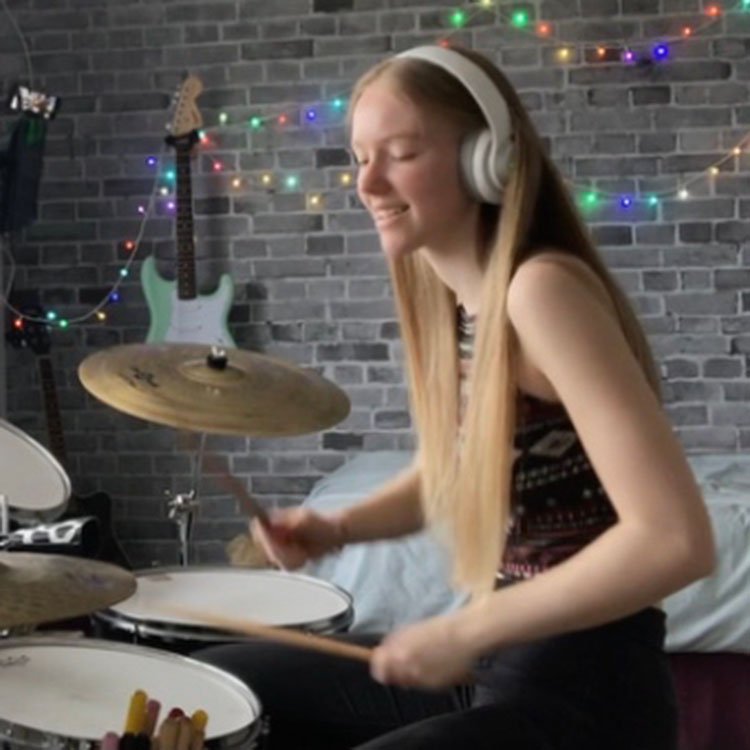 Hi I’m Amy Harrison and I am an 18 year old drummer from Bolton, UK. I have been playing drums for around 7 years and I am currently studying music at college as one of my A Levels.

My first instrument was the piano which started my passion for music and eventually led me to take up drumming. Drumming allows me to express my creativity with freedom with my main inspirations being Matt Helders, Sarah Thawer, Josh Dun and Mini Fairhurst.

In 2020, I created my YouTube channel and Instagram account for entertainment during the lockdown and began making drum covers. Through this, I have met and collaborated with so many talented musicians who have all motivated me to continue this journey and I feel proud to be part of such a supportive community. I recently played my first gig with a live band which was so fun and I hope to do more in the future.

Last year, I was the winner of the Hit Like A Girl contest in the UK under 18’s category which I couldn’t believe. I am excited to be one of the judges of this year’s HLAG and discover more aspiring female drummers!! 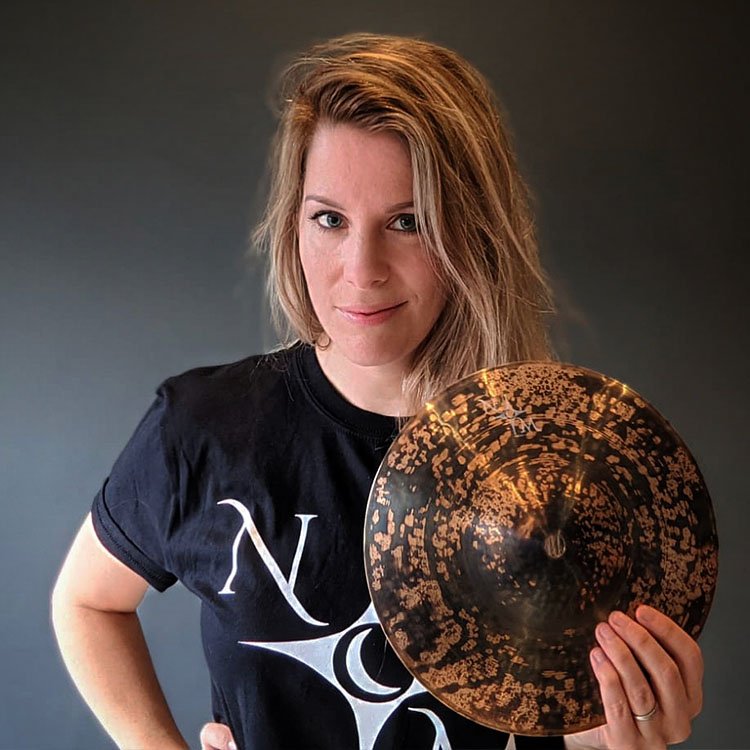 Ciara Chinniah is a British Drummer and Educator from Essex in the UK. With a love of Odd Time signatures, Ciara has been described as a Pop/Rock drummer with a progressive edge.

She is the co-host of the Podcast ‘Drum Education Live’ and ‘Drummer Mamas’ a podcast opening up the conversation about juggling parenthood and a career in drums.

Ciara plays for Electro Pop duo The Penelopes who regularly gig in Paris and London and she endorses NickyMoon cymbals. She also has a very active teaching schedule giving lessons locally at a music school and internationally to online students. 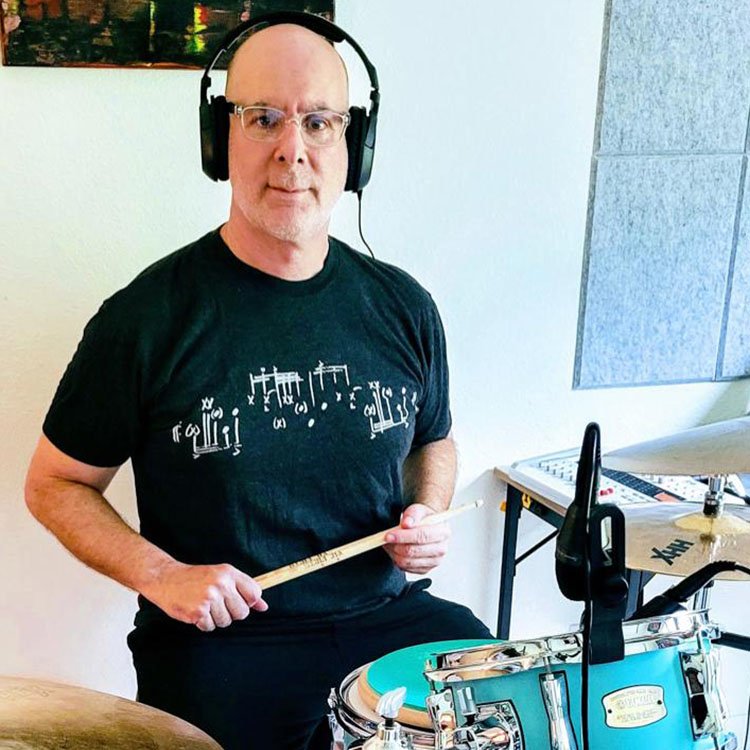 Dave Stark has been playing music since the age of 5 and has been teaching Drum Set for over 35 years. In addition to teaching all levels of Drum Set education, Dave is an author and sought after clinician. His teaching career includes clinics at Berklee, The Collective School of Music, MI and music venues/schools around the world.

Dave grew up in NY where he studied with some of the world’s top drummers and teachers including Jim Chapin, Gary Chaffee, Frankie Malabe and many others. He attended Berklee College of Music on scholarship and upon leaving he returned to NYC where his playing and teaching professionally thrived.

Dave is an artist and endorser of the following companies who have all recognized his commitment to Drum Set education: Sabian, Yamaha, Evans, Vic Firth, Prologix Percussion, and Solomon Mics. He is a current member of the PAS Education Committee, a former member of the Drum Set Committee and is the Florida Chapter President for PAS. 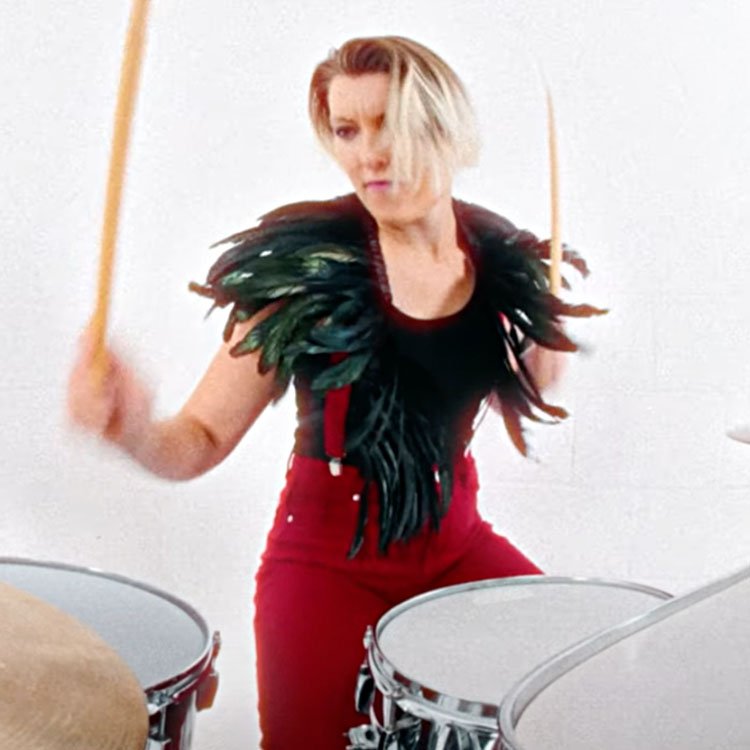 2019 Hit Like A Girl Champion Amanda Dal is a Swedish drummer with a BA and MA in popular music performance. She has performed with Grammy Award winners Clean Bandit, toured with Ruf Record’s Blues Caravan, the hit musical Rock of Ages, as well as Dom Coyote’s award-winning gig theatre Songs for the End of the World. In 2019 she became one of the winners of HLAG and is currently the drummer of London-based four piece, About Bunny.