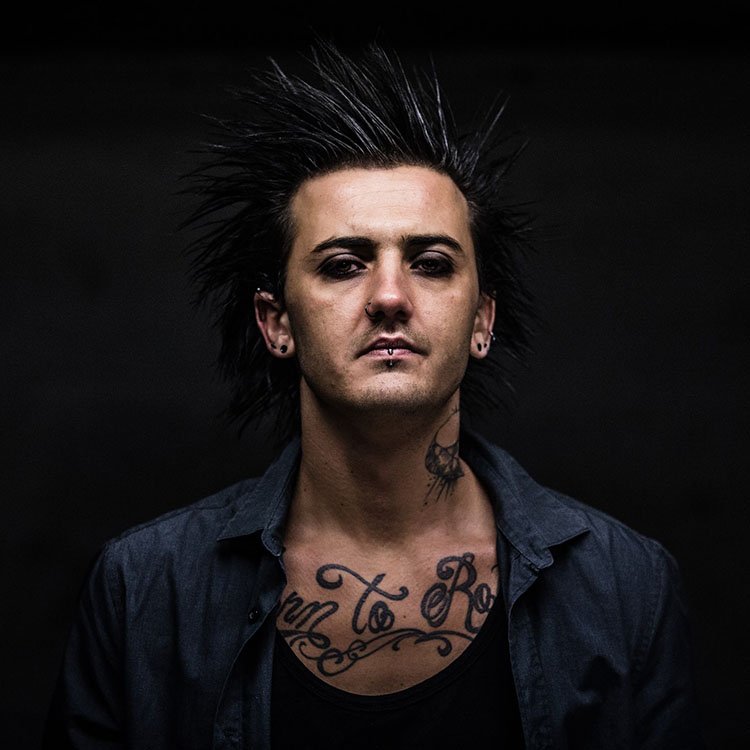 Morgan Berthet is one of the most famous drummers in France. He started playing drums at the age of 3 and attended several music schools as a child. In 2006, he graduated from the prestigious professional music school, Music Academy International in Nancy, where he received an official mention of excellence.

Since then he has pursued his professional career in France and abroad— playing with many top prog rock and metal bands and touring the world. In a little more than a decade, he has performed hundreds of shows and given dozens masterclasses.

The former drummer of bands such as Eyeless and The Mars Chronicles, Morgan has also recorded with Eths, Stephan Forte, Headcharger, In Other Climes, Adagio, H.A.H. and Disconnected. He currently tours and records with Myrath, Kadinja and Klone. In addition, he is the author of a regular column in France’s leading drum publication, Batterie. Jean-Philippe Fanfant is originally from Guadeloupe in the French Caribbean. He comes from three generations of great musicians and is one of the top studio drummers and performers in France.

He is the author of the drum method book “Afro-Caribbean Grooves For Drumset” published by Sher Music.

Because I didn’t see any women playing drums, it took a long time for me to realize that this was something I could do. As a teenager I told myself that if I would see even one example of woman who played the drums and built a career in music, I could overcome my doubts and play the instrument I longed to play. By age 17 the urge to play was so strong I decided to become a drummer— even if it wasn’t for girls. This revelation was like finding the key to unlock my heart.

This was also when the phrase “Hit like a girl.” took on a whole new meaning. For me it meant to hit your way, hit hard, hit with confidence because we girls have what it takes to play the drums and anything else we choose to do.

I took lessons, practiced and, eventually, I graduated from the music conservatory in Agen, France. During the same period I had the good fortune to play with several bands, including an electro-pop band in Europe, an acid-jazz group in Russia and a local rock band in Morocco. Earlier this year I won 3rd place in the French section of the Hit Like A Girl contest and I am now working with a variety of pop, funk and hip-hop bands here in France.

Today the world is changing. We see more and more women on stages and records and videos. Being an Ambassador of Hit Like a Girl gives me an opportunity to highlight female drummers for other girls and women who want to play drums but who may be hesitant like I was. I am so excited to be part of this change.

Zoé Hochberg is a 27-year old professional drummer and composer who graduated from the French drum school Dante Agostini in Paris. Passionate for hybrid sounds, Zoé is the drummer of the French pop band Hyphen Hyphen, mixing her acoustic drumming with some electronic production triggers and sequences.

She has been touring and recording with many artists for the past 8 years such as Soko, Prudence (The Dø), Naive New Beaters, Angelique Kidjo, Zazie, Laura Cahen and others. Zoé is also deeply involved in growing the female and GNC drummers community as she currently manages and hosts Tom Tom Magazine’s CHOPS TV sessions on Instagram.

In 2018, she was featured in Batteur Magazine and Batterie Magazine, and part of the “Revelations Of The Year 2019” in Batterie magazine. Zoé recently performed and composed the soundtrack of 2022 Cesar’s Revelations short movie. Clara Oulieu is a musician from Toulouse, France and is the 18+ winner of HLAG 2020 French edition.

She first learned to play the guitar and started her drumming journey by hitting a DIY drum kit made of her mother’s cooking pots at age 14. After several years of self-teaching, she joined the Dante Agostini drum school in Toulouse for 3 years to learn music theory and new kinds of rhythms. For a few years now, Clara shares her passion for drumming on Instagram by posting drum covers and grooves, which enabled her to connect with great musicians around the world.

Julie’s apprentice journey finally completed, she went on to play in various Metal bands such as HELLXHERE, ALPHA SPECIMEN or MIND IMPERIUM. In addition, she began teaching drums in the south of France, le Var, then in Lyon area.

In 2019, Julie published the first volume of her drumming method “A Vos baguettes!” (Get your sticks!) whose second part been released in 2020 and the third part is already written. 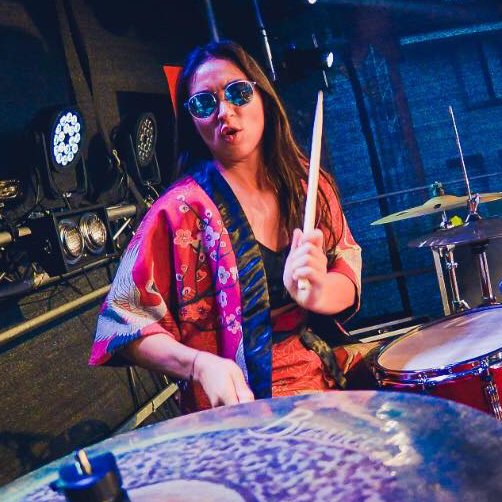 Morgane Taylor is a French drummer, born and raised in the sunny French Riviera. She grew up behind the drums, starting in 2000. Her professional playing includes studio sessions as well as live concerts.

At the age of only 27, she already played more than 100 live concerts both in France and Switzerland. Morgane shared the stage at Drummher Festival with Anika Nilles in 2018 and was selected as the solo drummer for a 360° video of the Cannes Lions Festival created by Asteroide.

Her progress and perseverance, along with her strong but elegant drumming, has allowed her to distinguish herself in the music industry. Camille Bigeault is a 30-year old French drumming sensation from Toulouse, France. Born to musician parents, she started drumming at 12 and composing, playing guitar and singing at 15. Later, she studied drums in a conservatory with a teacher that taught her Jazz, fusion, rock, and metal styles along with double pedal, drum ‘n’ bass, different time signatures and various drum techniques.

She earned a drum award at the school and a jazz musicology degree, all while playing with multiple bands, including Xxelles, a female jazz-fusion band, and La theorie des cordes, a progressive jazz-rock band. She later joined the Genesis tribute band, Genesya, and, after posting some of her mind-bending, polyrhythmic-based drumming videos on social networks, she was tapped to play in the French rock opera “Le Rouge et Le Noir”.

Since moving to Paris in 2017, Camille has become one of the busiest drummers in the city. As an educator, she shot educational videos about polyrhythms with Drumeo and Drumchannel, gave masterclasses and made appearances and clinics at drum festivals and events. As a performer, she toured with the french pop mega-star Jenifer, and currently plays with Mae Defays (soul/pop), PV Nova et l’internet orchestra (Funk/rock) and Edgar Mauer (Indie pop). She will release a drum method later this year. 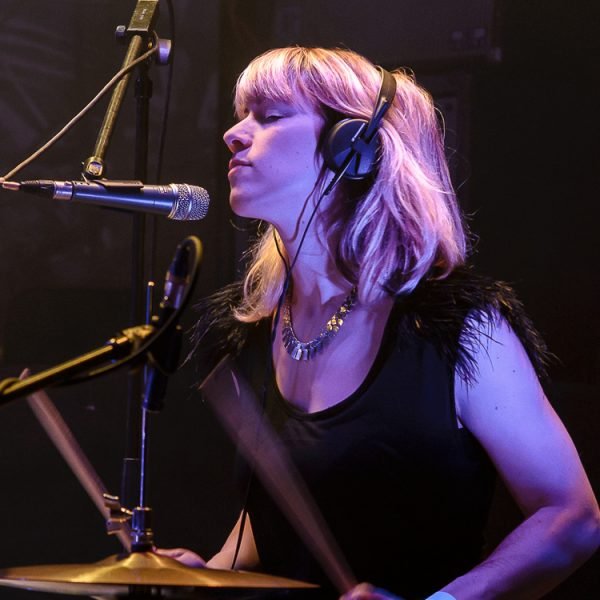 French batteuse Swanny Elzingre first learned to the play the piano but turned to drums at the age of 18. At 25 she decided to pursue a career in music and continued to strengthen her stage and studio playing. Her playing, which combines subtlety and femininity, lacks neither power nor bite.

Swanny has played in various styles (rock, pop, French chanson, soul) and in a variety of projects, including shows with French singer songwriter Cali and a tour with French singer songwriter Nach. In 2013, she gave the opening masterclass for the Drums Chelles Sessions— a major drum event/fair in the Paris region— with top European drummers Loïc Pontieux, Maxime Zampieri, Zaza Desiderio, Gergo Borai and Morgan Agren.

In 2015 Swanny toured the Zenith venues across France with French chanson singer Juniore, opening for best-selling act Brigitte . Her work with Juniore led to her being featured in the pages of Vogue, Elle and Grazia, and the French trend-setting magazine, Les Inrockuptibles.

Swanny is influenced by drummers such as John Bonham, Dave Grohl, David Garibaldi, Steve Gadd and Nate Smith— and their world-class grooves.